The yardstick : How would a Tunisian man conduct a relationship with a Tunisian woman?

No need to bring this back then: 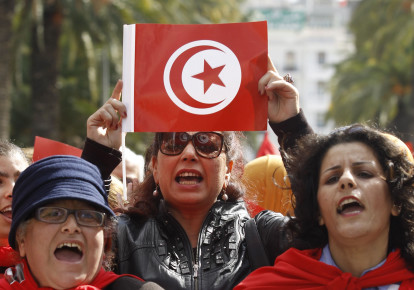 A Tunisian woman holds up a flag during a march to celebrate International Women's Day in Tunis March 8, 2014. (photo credit: ZOUBEIR SOUISSI / REUTERS)
"If some people condemn polygynous marriages it is because of imperialist and colonialist attitudes toward Muslim women"- Svetlana Peshkova, associate professor at the University of New Hampshire.
Debates surrounding polygamy have surfaced in Egypt and Tunisia in recent weeks as a remedy for the perceived dilemma of unmarried women that have surpassed the perceived usual age for wedlock. Pro-polygamy activists in both countries have claimed that the number of such women desiring marriage is already high and growing rapidly.

Polygamy is the umbrella term for the practice of marrying multiple spouses. Polygyny, which refers to a man married to more than one wife at a time, is the more precise sociological term for the phenomenon in question.

Last month, a group of Tunisian women reportedly took to social media to organize a pro-polygamy protest. The practice is outlawed in the North African nation and is widely considered taboo. Nevertheless, the group aims to amend the law by staging demonstrations outside government buildings.


According to a recent report by Tunisia’s National Office for Family and Population, the country has one of the highest number of single women in the Arab world. It revealed that as of last year their numbers increased to more than 2.25 million out of a total of 4.9 million females in the country.


Meanwhile in Egypt a similar social dynamic has sparked calls for increased polygamy. The Middle East Media Research Institute (MEMRI) reported that a debate on the matter recently took place on television with one sympathizer, Saber Ghanem, saying it
“is permitted under Shari’a [Islamic law]" and would address "a ticking time bomb in our society: 11 million [single] women who have surpassed the age of marriage.”

Ghanem argued that every human, including these women—wives, divorced women and widows—has “natural” and “sexual needs” which need to be satisfied and that polygamy adequately addresses this problem. “Another advantage of polygamy,” he added, “is that it strengthens the bonds between tribes, families and countries.”


Egypt allows the practice but restricts a Muslim man from marrying more than four wives. The husband must also gain the consent of his current wife or wives if hopes to take on more.


Dr. Janet Bennion, Professor of sociocultural anthropology at Northern Vermont University and an expert on polygamy, told The Media Line that the practice “is a viable alternative to a variety of alienating conditions, especially in patriarchal environments that do not always allow women the same rights and access to political and economic promotion.”


Women who are single, under such conditions, are often left destitute and without an economic and domestic network, she explained. Divorced, widowed and abandoned women also seek a supportive framework.


“It is not unlikely then that women are opting for polygamy in cases in which they can share the duties of childhood and career with other like-minded women. This same condition is seen in inner black U.S. cities such as Detroit or Chicago where Muslim women are seeking ‘good’ men who are already attached to another woman in order to live as mothers and workers, tapping into the female network established through plural marriage.”


Svetlana Peshkova, Associate Professor of Anthropology and an expert on Muslim societies at the University of New Hampshire, expressed skepticism about the high number of single women that pro-polygamy activists cite in Egypt and Tunisia.


“Nevertheless, the idea that Tunisian women would opt for polygynous marriages is not unusual considering the country’s economic state of affairs. People are trying to make ends meet and would like to have more financial security. If the state fails to provide this—for mothers particularly—more women will opt for such unions,” Peshkova told The Media Line.


“If some people condemn polygynous marriages it is because of imperialist and colonialist attitudes toward Muslim women who have for a long time been considered unable to articulate their own desires. If indeed they desire to enter into such marriages this should be up to them and articulated on their own terms.”


In other parts of the world there are plenty of social, familial and sexual relationships that are not legalized but are common in places like Europe and Russia, she explained. For example, it is not unusual for men to have mistresses in addition to a long-term partner.


“The problem in these cases is that these women are not legally protected. They cannot get benefits from common law which views them as non-legal partners and they do not receive social recognition. So, it is not completely unfathomable that women in these situations would want to be socially and legally recognized as wives and not just mistresses for an individual,” Peshkova concluded.


Radhia Jerbi, Director of the National Union of Tunisian Women, told The Media Line that there were calls for polygamy on social media but protests over the issue have not materialized. “As of yet, nothing has happened,” she said.


“Nevertheless, because of economic problems, I am not sure that Tunisian men can afford to maintain multiple wives. It would also not be easy to bring back polygamy for economic as well as social reasons as most Tunisians cannot accept it. They do not want to be like other Arab nations that do.”


Furthermore, on the political front, the laws prohibiting the practice are grouped under the Personal Status Code which is part and parcel of the Tunisian Constitution, Jerbi explained. It is therefore not easy to alter it, and any such amendments cannot be made merely via protest.


“The issue indicates a lack of awareness by those who are demanding polygamy,” she concluded. “This will not affect the lifestyle of Tunisian society or the achievements of Tunisian women.”

Of course, there would be more men to share between the Tunisian women....if they stopped pimping the prostitutes out to anything Western

Gonna show my fella this......see how much he'd have paid to buy me

The rats are going to have to scam twice as hard if they want a second wife to brag about. They can barely get enough for one bride, if that. And to sustain a family with three adults and ten kids? Definatly only for the wealthy.

This is one of the most ridiculous things ever.
I was a member on 1 group where there was loads of them in this type of marriage.
The jealousy between them was hideous considering they knew what they were signing up for but if you tried to question them as to why they agreed to it then you would be shot right down.

I can still recall some comments now. "I am so depressed wife no 3 has had more attention than me, my husband has spent 1 extra day with her when it was my day.
I have had a meeting with wife number 2 and we both agree that wife no 3 is demanding too much attention ."
And it went on and on that brown substance is unreal
D

I guess wife no 3 is the youngest

I don't think that a tuniasian male will burden himself with a new wife, who might not be a virgin, might have children or is his age. He'll go for the status wife, which he only gets if he has lots of money and the status wife will want to be wife no 1

Each wife must be treated equally each have they own house. He must provide for each of them and they children.
Hoping from house to house.
Seriously what man can afford to have 3 wives and a bunch of children.
A rat with a lot of western women to fund him.
A good muslim would not divorce it's frowned upon. Unless the wife did immoral deeds
Or the husband made up a lied, and let's face it who would believe a woman over a man in a country that men rule. His cousin will be the wife no 1
D

Talking about my own experience, my rat's mother (a big, fat monster, wife no 1) lay around in bed all day and wife no 2 did all the work. They all lived together in one house with all the children

I honestly do not know why a woman would choose that life.
That group had me ill
D

Going for the limit said:
I honestly do not know why a woman would choose that life.
That group had me ill
Click to expand...

I agree. I honestly don’t know why I even considered a life with a man who was visa hunting. I still kick myself for even the thought. So I have no clue how these women does it. It is not good mentally.

Heidi said:
Talking about my own experience, my rat's mother (a big, fat monster, wife no 1) lay around in bed all day and wife no 2 did all the work. They all lived together in one house with all the children
Click to expand...

Going for the limit said:
I honestly do not know why a woman would choose that life.
Click to expand...

Me either.....it's downright weird! If I wanted another woman to do my cooking and cleaning, I'd hire them....not agree to my husband having another wife.
I'd cry a million tears when he was in her room.
I don't understand this at all.
I guess some of the women want the social status of a married woman and mother, but not the attentions of a husband.....so maybe she's happy to share....I personally just find it bizarre.

Mango Chutney said:
Me either.....it's downright weird! If I wanted another woman to do my cooking and cleaning, I'd hire them....not agree to my husband having another wife.
I'd cry a million tears when he was in her room.
I don't understand this at all.
I guess some of the women want the social status of a married woman and mother, but not the attentions of a husband.....so maybe she's happy to share....I personally just find it bizarre.
Click to expand...

We live in a totally different world. I can’t imagine sharing my soulmate with anyone! And I say soulmate because I would not want to marry anyone I felt was less to me.
I think that is what makes it hard for us. We marry for love not convenience.

I think the law was made for dirty basteed men.
Although it was because of a lack of men after a war. Personally another woman wouldn't cope with me. As for the guy he would end up dead

Going for the limit said:
They think its absurbed that mary is worshipped and that she was a virgin.
Click to expand...

Heidi said:
Not even a reconstructed one

You got me reading this again.
Even though I couldn't manage 3 husband's.

If I was in a marriage to a man with more than 1 wife then fair Is fair I would want 3 husband's.
They would be forced to work each day cook clean ECT. A girl can dream

I think my brain needs reconstructed